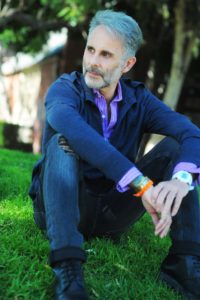 At a young age, I grew curious about human existence.  I found the same questions lingering at the periphery of my consciousness.  “Who am I?  Where did I come from?  Who made this material world, and what is the purpose of this human existence?”

Also the one that drove my mother crazy was where does the sun gets its power from, is it plugged in somewhere?

As time passed and adulthood set in these questions seemed to take a back seat to working, socializing and becoming part of the London 80’s scene.  This is when alcohol and drug abuse became a part of my lifestyle, and I found myself in the throes of addiction.  After a number of years I found recovery through a 12 step program.  I have been sober since April 1989.  The two things this program did for me was show me how to stay sober and allow my soul to start searching for its origin again.

I have been able to help many people out this cycle, teaching them how to change their thinking.

Many people, from all walks of life, suffer because of their thinking.  But freedom can be found.  Once that happens, there is a strong foundation to build upon to realize the unlived life within.

For the past 27 years I have had a spiritual practice under the guidance of a spiritual master and have implemented the teachings into my career and life in general.

Peter Ishkhans embodies the heart, style and aesthetic that’s made him a go to for the biggest names in Hollywood and rock and roll.

He then co-hosted “Fashion Police” and appeared regularly on E! and Style as a commentator.

He sold his business in 2011 and moved to India to live his unlived life and to further his studies in meditation and well-being.

Now back in Los Angeles he is a cutting edge life stylist and coach.  Peter insists on always bringing out the beauty and spirit within the individual so they can live and fulfill their life’s purpose.

Peter has lovingly guided me away from the illusions that caused me to suffer to an authentic relationship with my heart. He has a deep well of wisdom to draw from and has taught me to meet the challenges of living with increasing joy, peace and freedom. I am eternally grateful to Peter for my sobriety and my sense of ease and comfort with simply being me.L.B.

Peter Ishkhans knows deeply that it’s all an inside job and being the intuitive empath, healer (and coach) he is, I can think of no better to help you in the journey of you. Consider him your personal GPS guide for the road to wellness.Tamara Rawitt | Producer / Writer

Peter has been a friend and colleague for over 35 years. He offers guidance and enlightenment to everyone around him. He is a true inspiration. Peter has always been a very special person who brings spirituality, growth and happiness into all of the lives he touches.Neil Weisberg | Co-Owner Meche Salon

There are not enough words to describe how my life changed when I connected with the blessed soul – Peter Ishkhans. After my very first conversation with Peter, I hung up the phone thankful and exhaled with relief. I had no idea the impact he would have on my life then and I how I live it today…

Shocked with a diagnosis of breast cancer, Peter taught me how stillness and breath through meditation bring an inner awareness and connection to the heart. I know…. It is difficult to turn to stillness when when your mind is racing or your body is fighting, in fact it is typically the last thing you want to do. However, Peter reminded me those are the times when stillness and listening within are the most transformational and to use those moments. It was a “game changer” and flipped my mindset completely – I found freedom in the awareness mentally and physically. It did not remove anxiety, restless, pain and fear, it helped me use it to thrive, recharge my body and renew my inner spirit.

As I enhanced my commitment to meditation, I experienced a transformation that increased the love and acceptance I had for myself as well as other people. Peter taught me how the love within my heart, soul and mind are all interconnected to the spirit within me, and my body is just a vessel for my spirit. As I continue my practice, I love differently and have a renewed confidence, resolve and discipline within. I acknowledge the gift of spiritual power I have received, and will use it to influence and help others. Every time I am with Peter, my heart is filled beyond measure, and there are always words of wisdom that I cherish. One of my favorites as we discussed being happy he shared he is, “Happiest sitting in my own fragrance”. That is where it all begins.Angela Palmieri | VP, Brand Marketing and Film Distribution